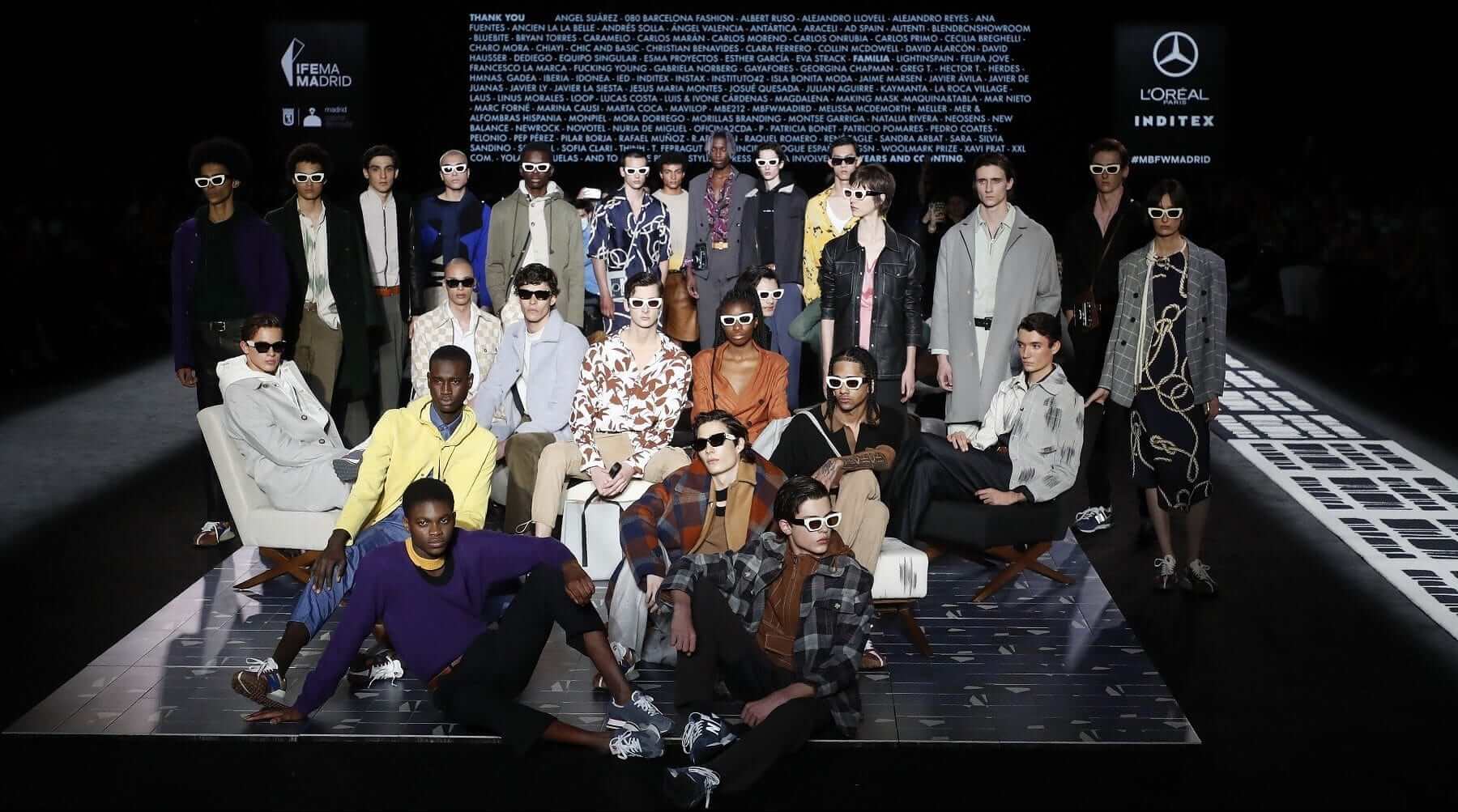 There are no limits to the applications of ceramics. The variety of formats and designs and its unbeatable technical performance open up a whole world of possibilities when it comes to covering all kinds of surfaces, even reaching the world's most important fashion catwalks, as we have seen once again this year at the Mercedes-Benz Fashion Week Madrid (MBFWMadrid). With an impressive staging, the designer Pablo Erroz has renewed its collaboration with Gayafores in a key year that coincides with the celebration of its 10th anniversary and the 75th anniversary of MBFWMadrid (formerly known as Pasarela Cibeles).

PANORAMIC PICTURE OF THE MBFWMADRID CATWALK WITH CONTRAST COBALT AS FLOORING

In this exceptional setting of MBFWMadrid, Pablo Erroz presented his new Non-Seasonal 22.23 collection, characterized by being a multidisciplinary proposal in which interior design has a prominent role and which has meant the launch of his first collection of porcelain floor and wall tiles, inspired precisely by his new prints.

For its presentation in society, Contrast Cobalto, the first porcelain collection signed by Pablo Erroz, has been installed at the foot of the catwalk in perfect harmony with other interior design elements such as furniture and carpets

For its launch, Contrast Cobalto, the first porcelain collection signed by Pablo Erroz, has been installed at the foot of the catwalk in perfect harmony with other interior design elements such as Mavilop furniture or Kaymanta carpets. Contrast Cobalto has been manufactured by Gayafores exclusively for the event with the different prints and in 16.5×16.5 format.In addition, as a detail for those attending the fashion show -among which were Begoña Gómez, wife of the President of the Spanish Government, and Miquel Iceta, Minister of Culture, among other personalities-, pieces of the collection with the designer's logo were handed out, to be used as coasters, as a tray or simply as a decorative object.

In this way, the creative director, who is currently one of the figures with the greatest projection in Spanish fashion, goes a step further and enters the world of porcelain tiles, discovering the many options of a material in which, thanks to digital technology, it is possible to reproduce any design, because, as he says, "fashion is more than clothes".

In this sense, Pablo Erroz leads one of the so-called "moral brands", with the circular economy and sustainable development very much in mind. A commitment to sustainability that fits perfectly with the characteristics of the ceramic product, which, in addition to being recyclable, is manufactured with 100% natural materials, minimizing the emission of pollutants and the generation of waste at all stages of the process.

Real sustainability and timeless designs are fundamental pillars that support the alliance between Pablo Erroz and Gayafores and that, after the experience lived in 2021 with the Canyon Pearl model, is now strengthened with an exclusive collection that places ceramics at the top of fashion.

0
We use our own and third-party cookies to analyze our services and show you advertising related to your preferences based on a profile developed from your browsing habits (e.g. pages visited). You can authorize the transfer of data to third parties and accept all cookies by clicking on the "Accept all" button or configure or reject their use by clicking on the "View preferences" button. By clicking "Save preferences", the cookie selection you have made will be saved. You can find more information in our
Manage options Gestionar los servicios Manage vendors Read more about these purposes
Configure (Takes about 1 min)
{title} {title} {title}